For over ten years, ProSiebenSat.1 has been using the proceeds from RED NOSE DAY to support social institutions such as Die Arche (The Ark), an organization for children and teens. In 2015, donations helped finance a new center in Berlin’s Treptow neighborhood. To the young people it serves, the center is like a second home.

The stickers aren’t cooperating. Felix and his friend Marcel have spent the past half hour patiently labeling jam jars, but the colorful strips always seem to come out a little crooked. Now Felix has decided he’d rather wrap lengths of colored wire around the jars and knot them. The two boys still have a lot of work ahead of them. They’re planning to make jam next week at The Ark, so they need to get a large supply of attractively designed containers ready now.

The Ark is Felix’s favorite place to spend his afternoons. Three times a week — whenever it’s open — the 11-year-old drops in. “There’s always so much to do here: crafts, games, barbecues, or I can do my homework,” Felix says.

On the long table, other children have also spread out their materials for crafts, painting, or solving puzzles. Supervisors are making sandwiches for afternoon snack time and preparing drinks in the open kitchen. In the next room, Felix’s half-sister Jenny and her friend Leyla lounge on a couch, chatting and watching other children play pool and football.

Many of The Ark’s centers are located in “problem areas,” although this neighborhood in the southeast of Berlin does not appear to belong to this category. The new developments in Treptow feature plenty of green space and look well cared for, with new apartment buildings going up near remodeled houses. Nor do the children look neglected. “Poverty is not just a money issue. There is also emotional poverty. Some kids have 50 euros in their pocket but nobody spends any time with them,” Bernd Siggelkow, founder of The Ark, says.

Pastor Siggelkow himself grew up without a mother and understands how it is when there isn’t much time to spare for children. “In our house, it was all about just fighting to survive.” He realized at a fairly early age that children need people to support them when nobody at home does. Although the childcare system in Germany keeps them occupied, “programs are not the key to children’s hearts. The only way to reach them is through love and relationships,” Siggelkow says. 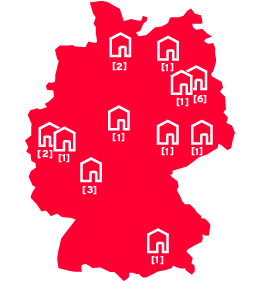 children are cared for daily

Felix and Jenny come from a blended family. According to Felix, it consists of nine siblings, though his half-sister claims eleven; the final count varies depending on which of the parents’ ex-relationships you include. It sounds complicated, but the large number of brothers and sisters doesn’t seem to pose a problem for the pair. “It’s only a pain when everybody wants to watch TV at the same time,” Felix says. His parents are at home yet don’t have much time for him, he says, because they have to take care of their youngest, Felix’s one-year-old sister.

He used to play games on his phone a lot. But now, at The Ark, he can’t do that too often anymore. No cell phone games are allowed after 4:30 p.m., according to Felix, who has lost interest in them anyway. “It’s pointless just running around racking up points for something all the time,” he says. The Ark’s supervisors make it their priority to help the girls and boys learn to stick to rules. “Some children have never experienced that at home,” says Martina Kuschmann, a trained childcare worker who now heads the center. At The Ark, the philosophy works: “I love seeing the kids putting their phones away all on their own and getting out board games.”

Dozens more children are running around on the playground next door. Some parents have joined them: Felix’s stepfather is helping his youngest daughter with her first attempts at climbing, some of the mothers are sitting on a bench having coffee, and inside the building a mother is playing pool with her son. On Wednesdays, parents are also invited to join in with crafts, help in the kitchen, or ask for advice when they are facing a problem.

“We aim to assist the families and offer advice and moral support — especially where women have a number of children and feel isolated and overwhelmed,” Siggelkow explains. This support is invaluable to mothers like Ramona Wegener, 35, who has been sending her children here for three years and comes every week herself. “We all get along well. They always have a sympathetic ear here,” says the single mother.

Problems tend to be resolved casually without a lot of red tape. There isn’t a sense of sitting down with a social worker to discuss your needs, Siggelkow says. The Ark feels like a family and the work is based on relationships: “It’s a friend talking to a friend.”

For many, Olga Pritzkau is also like an old friend. Long before The Ark operated under the aegis of the church, the pastor’s wife spent one day a week working with children and teens in the community center at the Evangelical free church. In October 2015, The Ark took over and expanded the project. Olga, as everyone calls her, is still involved. “I want to teach the children that they are valuable,” she says. She is thrilled that she can now spend even more time with her charges.

As far as Ramona Wegener is concerned, The Ark is the best place for her children: “They’re safe here and don’t get into trouble.” Her daughter Leyla and Jenny have become inseparable. At 15, they are the oldest visitors to The Ark and spend as much time as they can here. “We are a big community,” the girls agree. And it’s a community that is growing: According to Kuschmann, up to 55 children and 20 parents, give or take, come regularly. The once-monthly children’s party numbers even more.

Berlin counts six Ark centers. Siggelkow aims to expand the programs for the many children he feels live very isolated lives in the city. The Ark is building a ranch in a Brandenburg village where children will be able to learn about country life. “They won’t just pet the animals but also care for and feed them, so they will learn to take responsibility,” Siggelkow explains.

It’s late afternoon, and The Ark is winding down. Cleanup is in progress at the crafts table and in the kitchen. Felix and Marcel have succeeded in finishing today’s project with the jars. The last sandwiches have been doled out. Tomorrow will be a new day for The Ark. <

In 1995, Pastor Bernd Siggelkow founded The Ark as a charity for children and teens in Berlin’s Hellersdorf borough to get kids off the streets and offer them meaningful ways to spend their free time. There are now 20 centers throughout Germany, where a staff of mostly volunteers work with some 4,000 young people. They aim to teach them self-esteem and social skills, make the most of their potential, and expand their educational horizons. The Ark is funded through donations.

“Feeling good, doing good” has been the motto guiding ProSieben’s donation drives for needy children since 2003. A total of over 12 million euros has been collected to date, not least thanks to the efforts of a wealth of celebrities.

Funding has been awarded to causes including various Ark centers, a shelter operated by the Off Road Kids Foundation, and a soccer-focused boarding school in Haiti that was set up in the wake of the 2010 earthquake. Support has also gone to Syrian refugee camps, where provisional schools and child-friendly rooms were built. While in the past the money was distributed among various causes, 2015 marked the first year all proceeds went to just one project: The Ark in Berlin’s Treptow neighborhood. A donation of 133,000 euros made it possible to open the center in October. This year, RED NOSE DAY collected money for The Ark’s children’s ranch in the Brandenburg village of Schulzendorf. The farm will offer children and families a way to experience nature and animals up close.

RED NOSE DAY has evolved from a daylong comedy event into a donation drive lasting several weeks. The station’s staff organize the initiatives themselves, so all the funds collected go straight to their intended recipients.